Matt George is a patient advocate and survivor of paroxysmal nocturnal haemoglobinuria (PNH), a debilitating, rare, and life-threatening disorder. He was diagnosed with PNH when he was 24 years old, but his challenges did not begin or end there. We sat down with Matt to discuss his journey as a person with a rare disease. 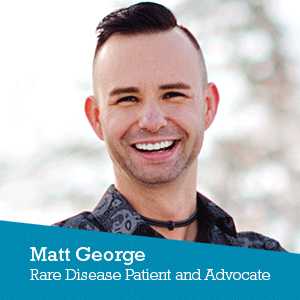 What was your life like before you were diagnosed with PNH?

Before I was diagnosed with PNH, I had a very inconsistent life; I had a lot of ups and downs. And when I say ups, things were relatively okay. I could go to work; I could go to school. Other times I would get really, really sick and I could be sick in bed for two days or it could be up to four weeks.

I worked for a family business, so it was difficult to take the time off. I had to give up things that I didn't have to do. I had to go to work, but I couldn't go out with friends. I couldn't do a lot of the fun stuff because I was just exhausted or feeling really sick or just overall crappy. I needed a ton of sleep, so the weekends were basically gone. The biggest struggle was that not only was I feeling sick from my disease, I also was giving up all the parts about life that are important.

"The biggest struggle was that not only was I feeling sick from my disease, I also was giving up all the parts about life that are important."

How did it affect you and your family?

A lot of people really worried about me, and that was frustrating for me, too, because I didn't want people to worry about me. I think, especially for my parents, it was very difficult because they didn't know what was happening and why. It was very tough.

What were the challenges of getting a diagnosis?

The challenges of getting diagnosed were - the only word I can really use for that is they were astronomical. It took five years for me to get diagnosed. I had gone first of all to my family doctor. I was then referred to a urologist, because with PNH one of the biggest noticeable symptoms is blood in your urine. I had a bunch of different tests done and they all concluded that there was no problem.

I tried to go on vacation and I got very, very sick. I went to my local Emergency room doctor and he referred me to a tropical disease specialist. The tropical disease specialist concluded that there was nothing that I had gotten when I was away and didn't really know what it was. Then he ended up referring me to a Gastroenterologist. He pulled out this old book, which had all this dust on it, brushed it off and he looked at it and he got an idea. He sent me for a couple more blood tests. I went for the second blood test and he said I'm going to refer you back to your family doctor and I'm going to get them to refer you to a hematologist. So I went to a local hematologist, and that's when I was able to be diagnosed with PNH.

After five years you were finally diagnosed with PNH. Were you treated at that time?

At that time, when I was initially diagnosed by the hematologist, I remember her saying to me, I think we've figured out what's wrong. She said you have a disease and it's called Paroxysmal Nocturnal Hemoglobinuria. And I said, okay. Good. Fix it.

She said, unfortunately, there isn't really a lot that we can do for PHN. And I said, so what do we know? What do we do from here? And she said it's a very rare disease. There's not much information on it. She said right now, there isn't anything that we can do. She just continued to monitor me and so there was no real improvement. Don't get me wrong, I was excited to have some sort of diagnosis so at least I knew what the problem was, but what was really frustrating is that there was no answer, and there was hardly any information on it and there did not seem to be many people who knew much about it.

Again things continued to deteriorate even more, and I was getting more frustrated and slowly getting sicker and sicker. It was very hard on my family and on my friends and everybody around me.

You then sought other opinions, what happened next?

I started looking into university hospitals, and I found a doctor who said there isn't really much we can do. And so that's when I think it really hit me that I knew that I was going to die. I think that's when the fear hit that this wasn't going to end well, and that what I felt now was maybe as good as it gets and that my life wasn't going to improve a whole lot.
I wanted to seek another opinion. I went to another hospital in London, Ontario and the doctor seemed to have a really good grasp on PNH and could really explain some of the fine details, and his outlook was a little more optimistic, but again, there was no new information. He could only monitor me.

I carried on for a little bit doing the best that I could. You still have to work. You still need money, but I was giving up almost everything else as I got sicker and sicker. And one day my doctor in London called me. I went in and he said there is a medication that's just been released by Health Canada, and he said, "I think it might help."

He put me in touch with the manufacturer patient support program because there's a high cost to the drug.

What help did you get from the manufacturer patient support program?

The program works to get people set up with their medications and they also work to get those medications funded and keep people who are on medications, funded. This is incredibly important because without a medication you're probably not going to live very long.

And the program fought, just like a team of lawyers, to make sure that I got this medication. It took about four weeks and they were on with the insurance company a few times a day because their goal was to get me approved and get me the medication today.

What happened when you received treatment?

I was very nervous. I'm thinking, hopefully after a while maybe it'll give me a little bit of relief. And so, they started the IV drip and within ten minutes of that medication starting to be infused into me, I got my life back. I could feel a difference. I could feel like someone pulled a plastic bag off of my face, I could feel the oxygen and the fatigue started to lift.

Slowly, as I was getting my infusions, I was feeling better and better. I had, prior to this, a brutal nodular acne on my face and back, almost like blood clots. I was jaundiced all the time. My urine was dark. But all those symptoms started to relieve. Of course, my body needed to repair and heal and it took over a couple of years in order for me to feel 100% again, but I would notice, week to week that I was feeling better; I was regaining my strength; I was feeling really good again; I was getting colour back.

It gave me the gift of having my life back and feeling a 100% again. Not having the symptoms; not feeling sick. Now I am able to go on a vacation, go out with my friends and do stuff with my partner. I can do simple things like cut the lawn, wash a car, and all of those things that normal people who are healthy don't think anything of.

How has your life changed since receiving treatment?

Up to today I've been treated for about five and a half, going on six years, and there is nothing that I can't do. I can do everything that a normal, healthy person could do. And I feel like a normal, healthy person. I don't have symptoms of my PNH anymore. I go to the gym three times a week. I work like ten or 11 hours, sometimes 12 hour days, and it's no problem. I live a fantastic life; I can do whatever I want to do.

What is your goal in being a patient advocate?

I'm happy to volunteer to tell my story and the journey that I've been on because I want to give back and I want to say thank you because I've gotten a gift like nobody could ever get.

And I also want to make people aware of the fact that there are answers in some cases for rare diseases. So, what happens if somebody has PNH and they don't get diagnosed and they die? And there's an answer right here today that's available for them? Everybody has the right to their life, and to feel good. Especially when there is an answer.
The other thing, too, is for physicians to be able to hear it from a patient's point of view. A doctor looking at a patient could easily overlook PNH because everybody's symptoms present slightly different. But when they hear it from a patient's perspective, they see the result. We have to make sure that nobody is overlooked because the answer is there.

So, by sharing that story with all different groups, whether it's the people at specialty pharmacies or hospital doctors and haematologists, and payers as well, like the insurance company, our government, all of those people need to be able to see what it does when the right people are connected with the right things. Because without any one of those links of that train, I will not survive.

"You have to remember, when you're really, really sick, it's very difficult to advocate and to fight and to have the energy to do that."

Rethink: The Future of Benefit Verification

What does the future of benefit verification look like for manufacturer patient support programs?

Pre-launch checklist: what to look for in a commercialization partner 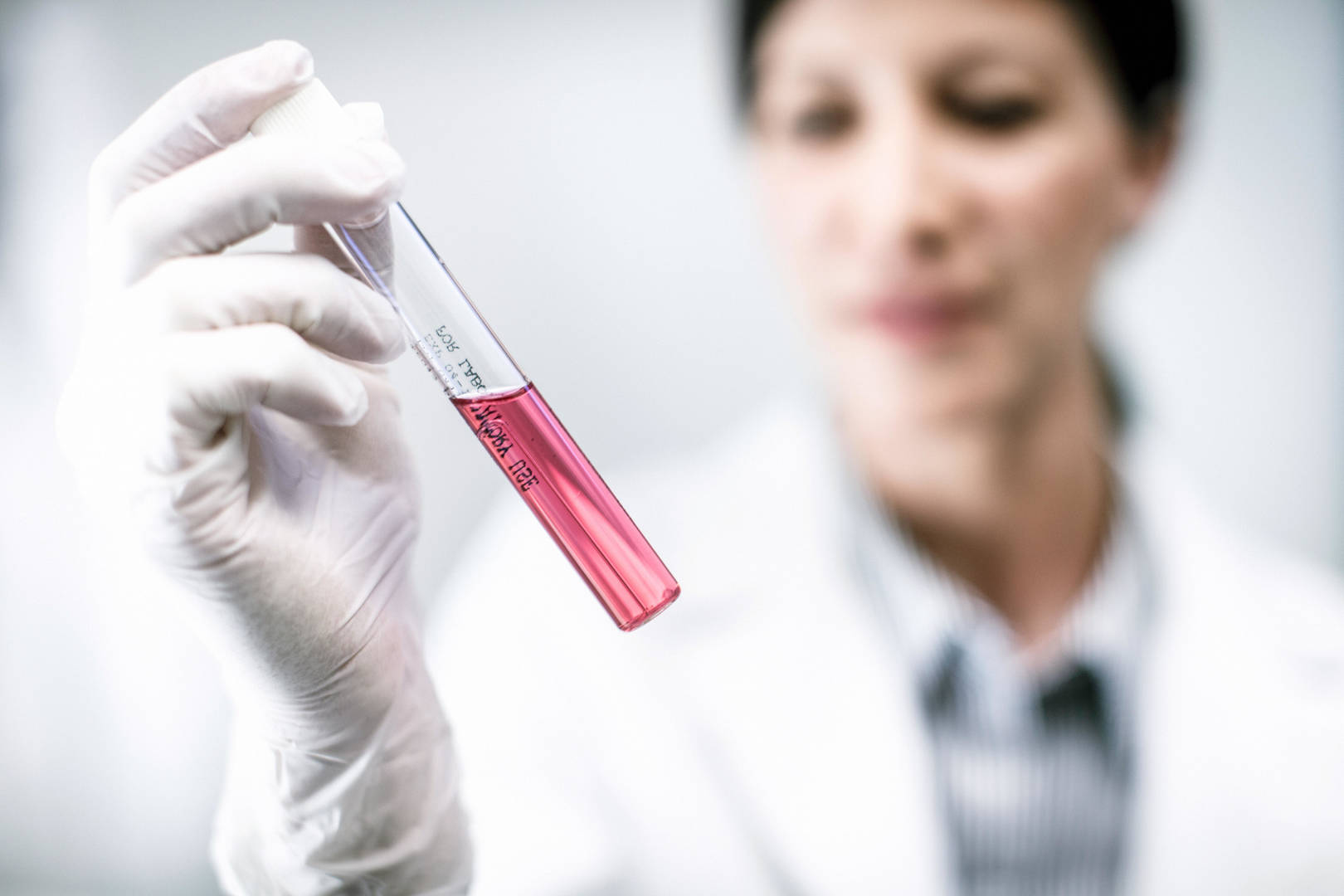