Insights Home
U.S. biosimilars are coming, just as they’ve arrived and prospered in the Europe. By ensuring positive patient experiences, specialty pharmacies will help usher in a sustainable wave of biosimilar products.

Last month, the Food and Drug Administration (FDA) announced the first biosimilar product approved in the United States for the treatment of certain types of breast and stomach cancer.1

In support of the news, FDA Commissioner Scott Gottlieb, MD, emphasized the agency’s plan to ramp up the number of biosimilar approvals, thereby promoting competition that could lower healthcare costs. “This is especially important when it comes to diseases like cancer, [which] have a high cost burden for patients,” he remarked.2

Let’s take a deeper look at where biosimilars stand today, why we’re bullish on their future, and ramifications for specialty pharmacies.

Biosimilars Defined
Understanding biosimilars actually starts with biological products (biologics), the fastest-growing class of U.S therapeutics, according to the FDA.3

Manufacturers produce biologics — made up of large, complex molecules — in a living system such as a microorganism or plant/ animal cell. The many types of approved biologics include therapeutic proteins, monoclonal antibodies and vaccines.4

Also important, biosimilars are licensed through an abbreviated regulatory pathway, authorized in 2010 by the Biologics Price Competition and Innovation Act (part of the Affordable Care Act), that avoids duplication of costly clinical trials.6

Market Landscape
Although biosimilars have the attention and support of the FDA, it’s realistic to view the product class as still in its infancy in the United States, with the first drug having been approved in 2015.

The European Union (EU), in contrast, introduced a dedicated approval route for biosimilars in 2004. Approval for the first EU biosimilar, the growth hormone somatropin, followed in 2006. Since then, the EU has approved more than 30 biosimilars, the highest number worldwide.7 More than 700 million patient days of biosimilar experience have been documented over the course of a decade in the EU.8

To further put things in perspective, the U.S. accounts for an estimated 60 percent of global biologic sales; however, the EU tallied 90 percent of biosimilar product sales in 2016.9

The EU experience proves that biosimilar developers can bring products to market with significantly less cost of goods by utilizing results from years’ worth of clinical studies conducted by the innovator. The market has grown because biosimilars match up with almost no difference to their biologic counterparts from a safety, purity and efficacy perspective — and the biosimilars have reached patients who otherwise would not have had access or been able to afford the biologics.

We have every reason to believe the same pattern will unfold in the U.S. In fact, a recent RAND Corporation study estimates that biosimilars will reduce direct U.S. spending on biologics by $54 billion between 2017 and 2026.10 Separate analysis indicates that assigning special billing codes for each individual biosimilar could generate Medicare savings of $65 billion over 10 years.11

At this point here in the States, the FDA has approved biosimilar follow-ons to the biologic products filgrastim, infliximab, etanercept, adalimumab, insulin glargine, bevacizumab and trastuzumab. 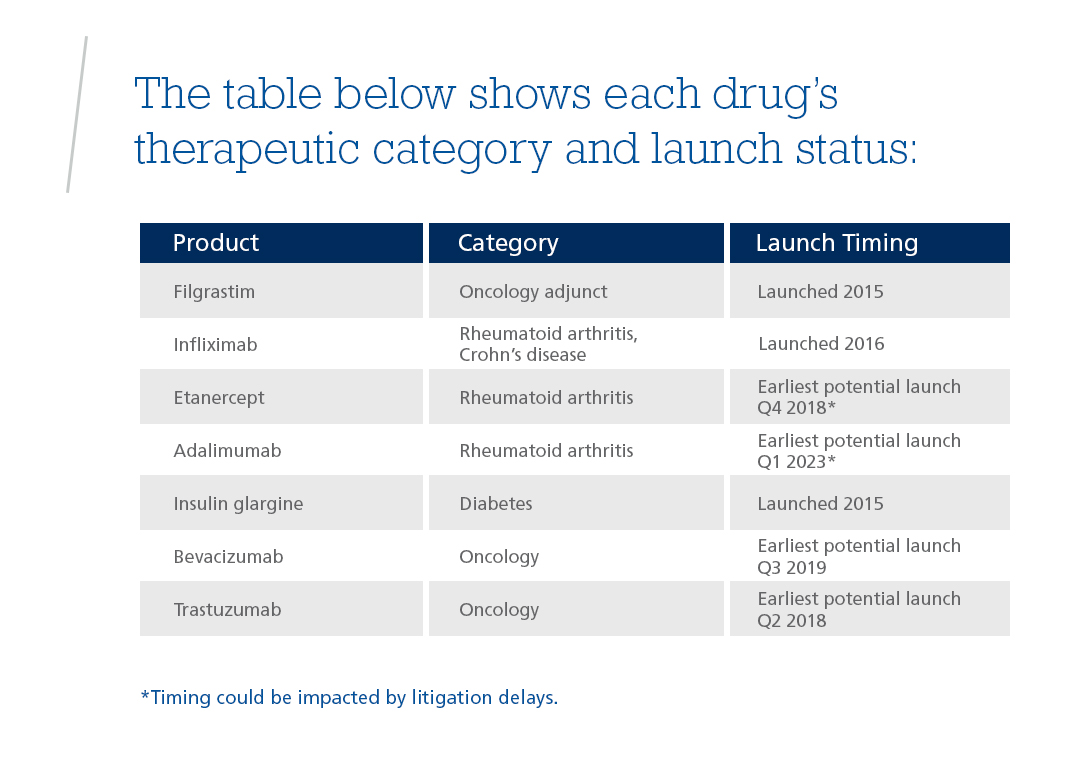 Overall, current trends indicate that product launches will be more susceptible to patent litigation delays than regulatory updates. All the same, we anticipate market challenges will be overcome in such a way that, within the next two years, we’ll see considerable product uptake with a direct effect on the biologic market.

And while patients intrinsically trust their physician, physicians don’t necessarily trust biosimilar manufacturers and their products. What’s needed is an education loop that encompasses patients, physicians and providers to reinforce that biosimilars are as safe and effective as innovator products and will have a positive impact on patient lives. Concurrently, patients will need to learn how to administer, handle and store biosimilars to drive improved adherence.13

Specialty pharmacies should take advantage of patient services offered by distribution channels to assist in areas such as co-pay and deductible support to factor in total out-of-pocket spending. At a minimum, patient services should be on par with those offered by innovator companies.

In the end, biosimilars are coming, just as they’ve arrived and prospered in the European market. They’ll provide access and affordability to patients who’ve never experienced those attributes. By ensuring positive patient experiences, specialty pharmacies will help usher in a sustainable wave of biosimilar products.

How Do Allocations Work for the Pharma Supply Chain? 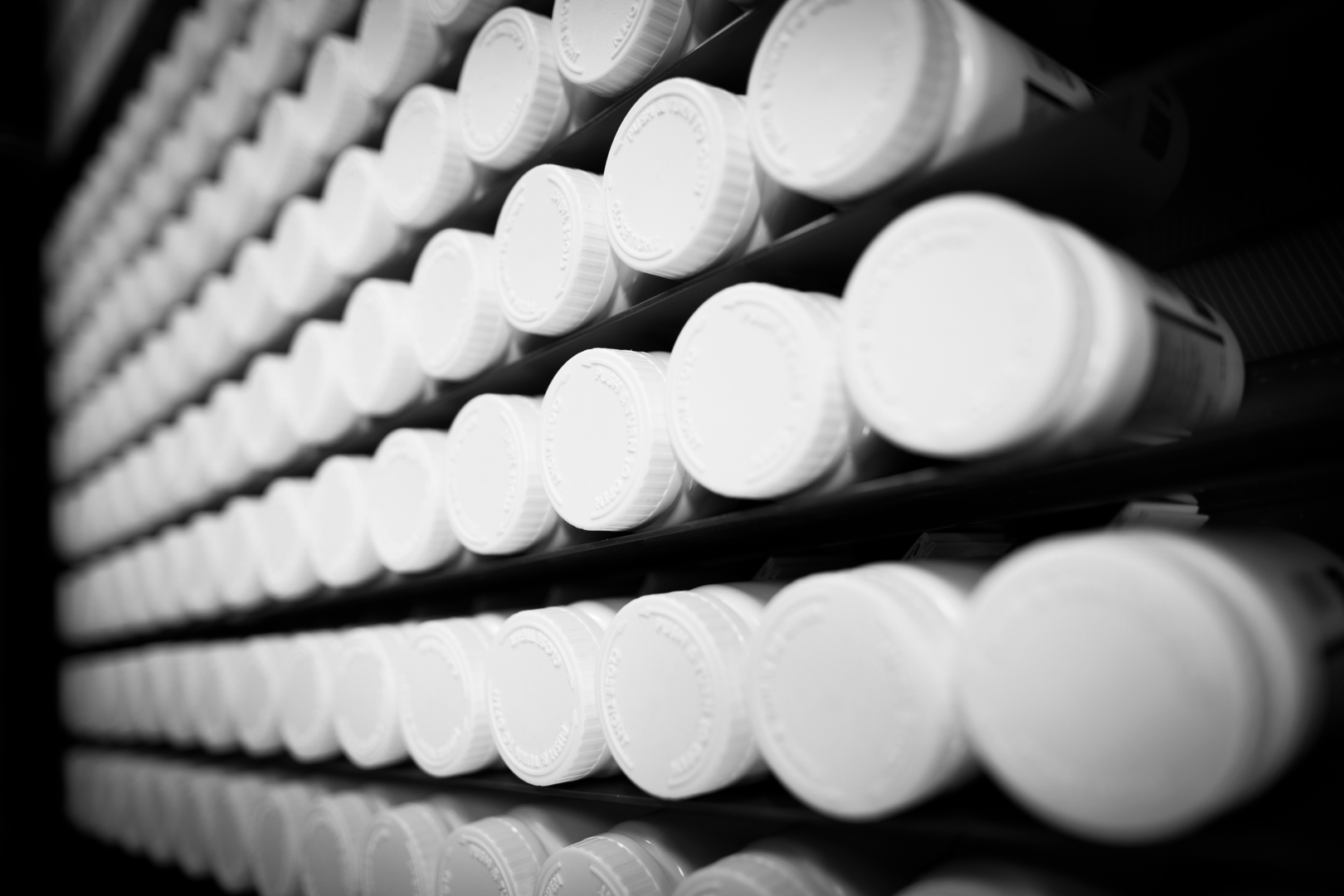 We asked 100 physicians to share their perspectives on biosimilar utilization, cost savings, and adoption barriers. See what they said and what it means for the market and manufacturers.

Our Most-Read Insights of 2018

A collection of AmerisourceBergen's top insights from 2018, including commercialization considerations for novel therapies, emerging trends in retail and specialty pharmacy and best practices for managing inventory in the specialty practice.